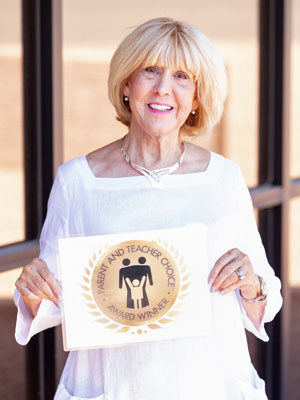 About the Author
Dr. Wanda C. Phillips is the founder and creator of Easy Grammar Systems. Originally from Pennsylvania, Wanda earned a B.S. degree in Secondary Education from Shippensburg University in 1969, elementary certification from Grand Canyon College in Arizona, and a Master's Degree in educational leadership from Northern Arizona University in 1992.  In 2007, Wanda earned a doctorate from George Fox, a Christian University in Newburg, Oregon.

During Mrs. Phillips's teaching career, she developed a successful, innovative approach to grammar instruction. Her first textbook, Easy Grammar, was published in 1985. Since then, she has written an Easy Grammar series, a Daily Grams: Guided Review Aiding Mastery Skills series, and a writing text, Easy Writing.

Graduating with a B. S. in Secondary Education (English as a major), Wanda began teaching at the high school level.  "Very soon," she relates, "I began to question why these students were coming to me without an understanding of grammar.  I'm embarrassed now to admit it, but I blamed it on the junior high and elementary teachers".

Within a short time, Wanda secured a position at the seventh grade level.  "I was immediately struck by the realization that my students could tell me little besides a definition of nouns.  I asked myself how this could be in that students obviously had studied nouns since first (or second) grade."  After perusing her English text, Phillips realized that the texts were at fault.  Concepts were taught in isolation and yet the discreet skills or building blocks of each concept were often presented without breaking them down.  Wanda notes,  'Nouns, for example, were introduced the first few weeks of the school year and then mostly forgotten.  No wonder students lacked mastery."  Phillips set out to change this by introducing the most basic idea within each concept and then building upon that knowledge.  She also introduced concepts and then reviewed them throughout.

Wanda Phillips used the prepositional approach and combined it with various strategies for effective teaching.  She also added review both on a daily basis (Daily Grams) and cumulatively at the end of each unit (included in Easy Grammar texts). "My students began to like English because it made sense, and their scores improved remarkably," Wanda shares.  The Easy Grammar teaching texts and Daily Grams review texts were written because she wanted to share this very simple but effective method with others.  "I realized that students throughout the nation could benefit by using this approach," Phillips notes.  "I began writing my program into texts because of the need to help children learn to speak and to write properly. This was the basis for text development, and it continues to be my mission."
Wanda C. Phillips is the author of:
​
Wanda C. Phillips, Ed.D. has received the following awards: